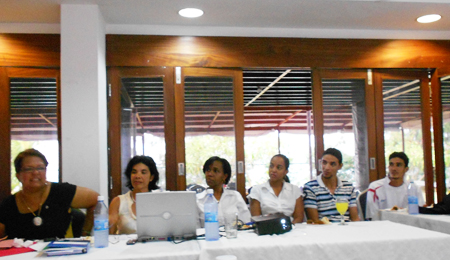 On the 11th of July 2013, the RC Victoria Coco De Mer had the pleasure to host Dr Daniella Malulu as first guest speaker.
During her presentation, she opened our eyes towards a world, a sad reality which was unknown for most of our members.

We learned about the quantity of heroin addicts in Seychelles, the behavior dictated by the dependence to the drugs, the physical destruction of the drug users and the long term consequences on these drug abusers.

We learned about the way the Wellness Center is coping with the problem, mainly through medication, but also associated with different components, among them the spiritual aspect.

After the meeting, the members went back home very perturbed.

About each extended family in Seychelles has one member concerned with drug abuse. The issue is not only an individual drama, it is also a National issue as so many young men and women walk as zombies, are not in a state of mind to be able to learn anything, are without energy and strength, are not able to sustain a short concentration in any task and they depend on the assistance of the rest of the population. This can be called a National silent and rampant catastrophe, which started to affect significantly the small Creole population in the Seychelles.

Following the expose of Dr Malulu who became, since then, a member of our Rotary Club of Victoria Coco de Mer, the club organized several visits to the center, a first fund raising activity and a first donation. More actions will take place not only towards the former patients of the Wellness Center but also to those who decided genuinely to turn a new page in their life.

To read the well documented power point presentation of Dr D Malulu, you can click on the following Rotary Wheel