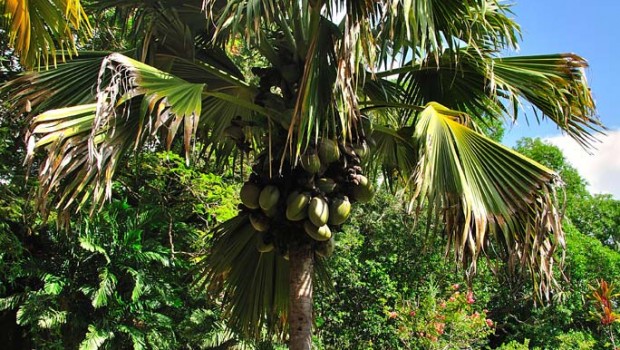 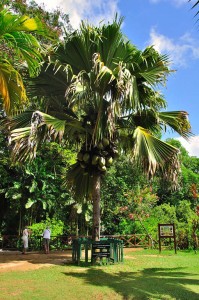 A word of history

The Seychelles nut was once believed to be a sea-bean or drift seed, a seed evolved to be dispersed by the sea.

Until the true source of the nut was discovered in 1768 by Dufresne, it was believed by many to grow on a mythical tree at the bottom of the sea.

However, it is now known that the viable nut is too dense to float and only rotten nuts can be found at the sea surface, thus explaining why the trees are limited in range to just two islands.

European nobles in the sixteenth century would often have the shells of these nuts polished and decorated with valuable jewels as collectibles for their private galleries. The coco de mer tree is now a rare and protected species. 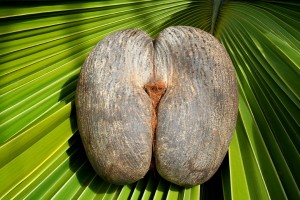 The leaves are fan-shaped, 7-10 m long and 4.5 m wide with a 4 m petiole. It is dioecious, with a separate male and female plants (see pictures)

The male flowers are catkin-like, up to 1 m long, giant phallus shaped tubes studded with hundreds of delicate yellow flowers that give off a musky odour.

The mature fruit is 40-50 cm in diameter and weights 15-30 kg, and contains the largest seed in the plant kingdom. The mature seeds weighting up to 17.6 kg are the world’s heaviest and the female flowers are the largest of any palm.

The largest fruit so far recorded weighted 42 kg. The fruit, which requires 6-7 years to mature and a further two years to germinate, is sometimes referred to as the sea coconut, love nut, double coconut, coco fesse or Seychelles nut. 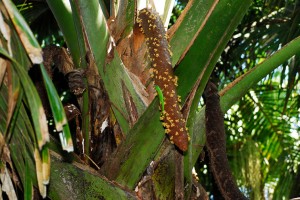 On the tree, the coconut is a giant green orb, but inside, with the outer husk removed, it closely resembles a female human bottom.

The Seychelles is a World Heritate Site, and a third of the area is now protected. The main populations of coco-de-mer palms are found within the Praslin and Curieuse National Parks, and the trade in nuts is controlled by the Coco-de–mer (management) Decree of 1995.

Presently all the nuts are under the obligation to be tagged and registered officially; an export permit to take them out of the Seychelles is needed.

The choice of our club name: Victoria- Coco de Mer.

While our “Godfather Club” the RC of Victoria meets at noon, our club gathers its members in late afternoon, hence opening new opportunities for busy professionals to meet after the traditional working hours; but as we meet as well in Victoria, we needed to differentiate the new club.

The Coco de Mer tree is part of the Seychelles in heritage and its roots go deeply in the heart of our Creole culture; so is the vision for our new club.