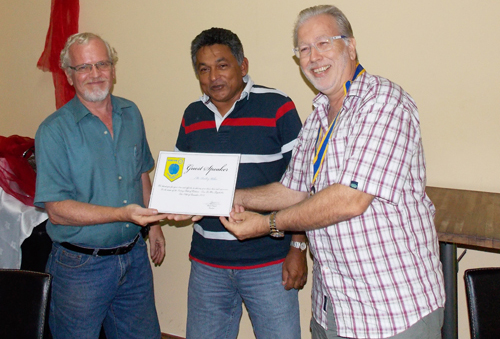 On the 19th of December 2013, the RC Victoria Coco De Mer had the pleasure to host Mr Radley Weber and Mr Brian Orr as fourth guest speaker of the year.

It just happened that it was the last meeting of the year and we also enjoyed some champagne  to celebrate the end of the year. Extract from the official website of the company Vetivertech. Solar Photovoltaic (or PV) technology allows to convert sunlight directly into electricity. PV gets its name from the process of converting light (photons) to electricity (voltage).

PV technoology was discovered in 1954 when scientists discovered that silicon (an element found in sand) created an electric charge when exposed to sunlight.

Today, Solar PV is a proven technology which provides electricity to millions of homes and businesses worldwide.

Solar panels are typically made of about 60 cells of 4 Watts each and deliver a power of 240 Wp. A typical house in Seychelles will requires between 10 panels (2.4kWp) and 50 panels (12kWp) to cover its electricity requirements, depending on the number of appliances such as cooker, refrigerator, TV, lighting and air conditioning.

Solar panels are usually installed on the roof and mounted on aluminum rails to create an array. For applications such as hotels and industries, arrays are interconnected to form a large scale PV system of several hundred kWp.

The two principal types of PV systems are grid-connected and stand-alone systems :